Consumer Electronics Show (CES) has been a grand ceremony for both electronics developers and media. Not just tech media, but other sections of the press have gone gung-ho about the CES that is going on in Las Vegas this week. And CES never fails to surprise us, so was CES 2013 that held in Las Vegas last week.

Ever traveled with your tablet? Then you've probably discovered a truth: Your laptop's USB ports don't supply enough battery to charge that tablet. That's why, for example, you see a "Not Charging" message when you plug an iPad into a typical USB port. 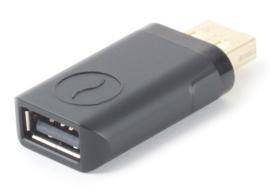 This year's CES, a great little travel accessory designed to overcome that problem has caught many people's attention. The Digital Innovations ChargeDr promises faster USB-powered charging—not just for tablets, but for phones as well.

To use this small gadget all you need to do is plug the dongle into a computer's USB port, then connect your regular sync/charge cable. According to Digital Innovations, the ChargeDr will charge tablets up to four times faster and smartphones up to two times faster. What's more, it could also be used with wall and car chargers.

Some people have tested the gizmo, and reported that it could actually boost the power output of a USB port. When tested with a laptop and an iPad 3, the charger did make the latter start charging. According to Digital Innovations, the gizmo supports not only tablets like the iPad and Samsung Galaxy Tab, but also phones, potentially charging them up to twice as fast via a laptop USB port.

I myself haven't got the chance to test this mini charger, and see how it works. Still I believe for those who frequently run into on-the-go charging problems with their tablets, or just want to lighten the load by carrying less power brick, this gadget might be a perfect addition to their carry-on bags.

It is reported that he ChargeDr will go on sale in March for $29.99. Guess many are already expecting to test the great charging power of ChargeDr on their tablet and laptop.

Related Articles
How to reset bios password on HP laptop
How to recover forgot Windows live id password
How to speed up Windows 8.1 computer